From there we took Long Island Railroad (LIRR) to Penn Station for another $8. The LIRR was much less crowded than subway. We then took subway from Penn to Times Square (2 stops to 50th St station). Radio City Apartments were just 2 mins walk from subway.

Metro cards are still for sale but we just tapped on + off  with debit cards each trip. If you tap on 12 times , week beginning Mon,  with same card, all further trips that week (til Sun) are free. Each trip is 2.50 regardless of distance.

Radio City Apartments were perfect for us, right beside Times Square and two minutes from Rockefeller centre.

We had 2 comfortable double beds and Ciaran said the beds ettee in living room was very comfortable. Bathroom clean, good shower over bath.  Tiny kitchenette with full fridge, microwave,  coffee maker + kettle. Coffee + sugar supplied . Carpet a bit dated in bedroom + living room but everything v clean + daily bed making,  + fresh towels. Some city  noises but as you would expect. We were on 7th floor and there are 2 smallish lifts  Left luggage room for last day, free of charge.

Took approx 1 hour commute from airport  so after unpacking and freshen up we went exploring . Dinner was in Japanese restaurant EAK Izakaya, 306 W 46th St. Lovely spot,  nice buzz, we ate at the bar.

A bowl of Ramen and a couple of beers/wine and we all slept like babies.

Fri breakfast was in Honeybrains , 916 8th Avenue. Its full if healthy options to set you up for the day. 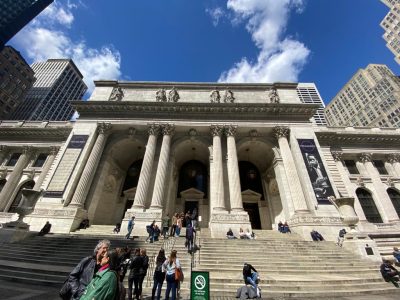 We visited the New York City library, beautiful old building, and sat in Bryant Park nearby. We headed to Ground Zero, stopping to admire the Concourse in Grand Central Station, and clocking Macys and the Empire state building.  The Oculus metro station/shopping centre is beside the One World Trade center. Its designed to look like a dove and is a huge retail space, def worth a visit. On Fridays there is a great selection of street food vendors outside + a great atmosphere.

Ground Zero is very emotional + sobering. So many names on both memorials, with single roses as birthday remembrances scattered throughout. We didn’t visit the museum which is nearby

Fuelled by our street food lunch we walked the Brooklyn Bridge. Glad we had water with us. It was a lovely sunny afternoon + there was quite a number walking it. Cyclists have a separate path which makes it much more pleasant for pedestrians. 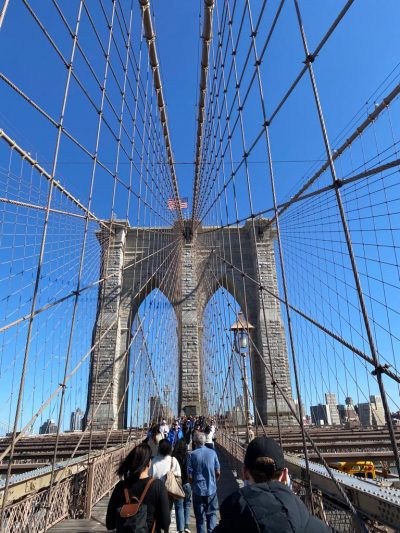 Views from the bridge are so great.

We rested for a while in Cadman plaza Park and strolled to a brewery for a couple of beers.

We then went to the Barclays centre to see Brooklyn nets vs  Cleveland Cavaliers. There were dancers, female + male, and a rapper as interval entertainment and a great atmosphere. We didn’t manage to catch any free tee-shirts! Kev should have listened to the guy who said one bucket of popcorn was enough for three! They’re huge +so salty!!.

Dinner that night was a pizza slice on the hoof!

On Saturday we went to the Metropolitan museum. Ciaran loved the ancient Egyptian, African and Greek sections and the Asian sections.  We squeezed in a few old Masters paintings also and then went into Central Park. Plan A was to hire bikes (either Citibikes or one of the private companies) but we opted instead for a stroll and crossed over to the Strawberry fields area in memory of John Lennon. 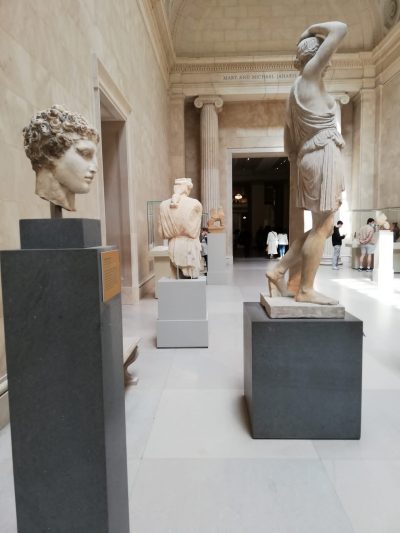 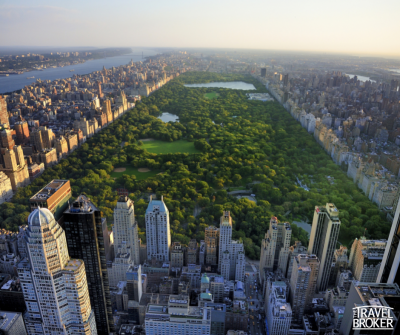 There was a really good group there singing Beatles songs, very mellow.

There was other street entertainment in the park and it was lovely to see spring flowers there. We walked by the boating lake but managed to miss the Alice in Wonderland statue.

We met Aideen for dinner in Viv that night  Its a Thai restaurant in Hells Kitchen (717 9th Ave). Very lively spot, booking essential, and great food and cocktails.

The lads got a second wind and after escorting me home they went to see DJ Harvey in the Hall, Elsewhere in Brooklyn.

They had a great night,  the place was hopping, and no bother travelling home by subway at 5am!

Their only complaint was the lack of street food at that hour in the city that never sleeps!

While the lads slept, I met Aideen for breakfast on Sunday.  The Comfort Diner (214 E 45th St) was so good I brought the lads back the next day. Its a real American Diner and close to Fitzpatrick Grand Central where she was staying.

We tried to visit St Patrick’s cathedral but Palm Sunday Mass was on and it was closed to visitors. 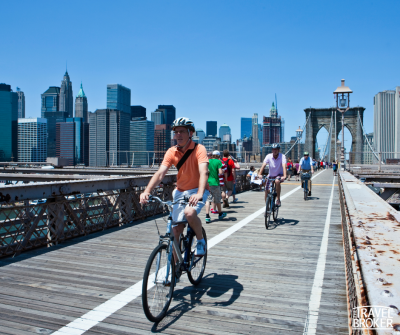 When they got going, we went over and back on the Staten Island Ferry, free service, runs on the half hour) to see Statue of Liberty + Ellis Island,  went to Wall St,(didn’t queue to rub the bull’s balls!), Chinatown and Little Italy and walked to SOHO. We missed the Tenement museum which Valerie had recommended.  The hotdogs in  CRIF  dogs (113 St Marks place) looked really good but we were still full from Chinese food. The phone booth in Crif is actually the entrance to a Speakeasy called Please don’t Tell. You dial the phone + they check you out. It sounded busy but we didn’t make the grade and went to a great bar across the road (choice of 2, Bua (Irish) and Craft +Carry (St Marks) where we consoled ourselves with some good beers and a few takeaways. 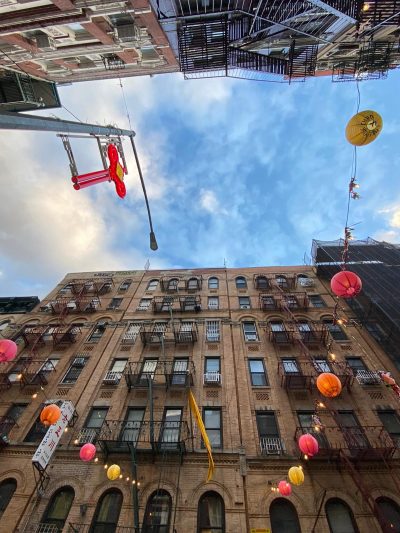 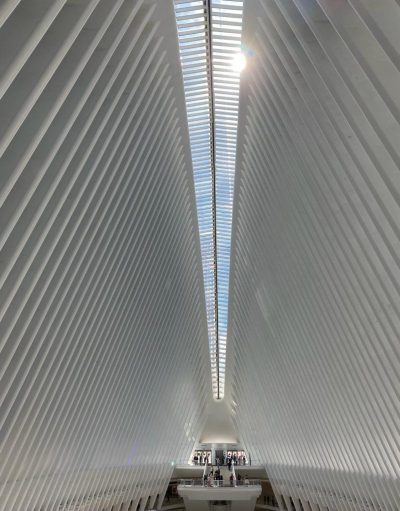 On Monday we had breakfast in Gregory’s Broadway and after a brief visit to Harlem (we crossed 110th Street),  we hit the shops.  We went to Macys and I was  pleasantly surprised at the prices. The strap of my bag broke while we were there (the lads claim I cut it!) and I got a Guess replacement for $50. 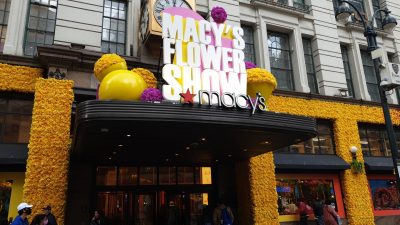 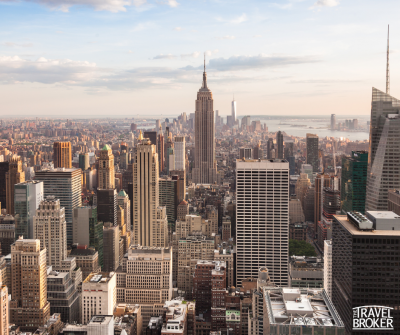 Dinner on Monday night was in Celeste (502 Amsterdam avenue)in the upper West Side. Its Napolitan Italian food and really good, homemade pasta. I had anchovies on brown bread with salad to start, then  Ravioli in tomato sauce, finishing with Tarfuto al Limoncello. Ciaran + Kev were equally happy with their choices. It’s a cash only restaurant but they have an in house ATM.

We then adjourned to a Tiki bar across the road for some cocktails.

On Tuesday we went by subway to Hudsons yard and walked the Highline to the Meatpacker District. It was hot and sunny and we took a few rests on the way. We saw the new Little Island to the right at the end but didn’t have time to visit. Its said to be lovely with walkways and amphitheatre.

The trees on the Highline were in bloom and it was just lovely.

We then hopped on a train to the Strand bookshop (828 Broadway) which has such an amazing selection of books (over 2.5 million!) and very helpful staff.

Hadn’t time to visit Washington Square Park which is very close by.

Lunch was in the Majestic Deli, Broadway, near Times Square,  and we also bought takeaway sandwiches for the airport. 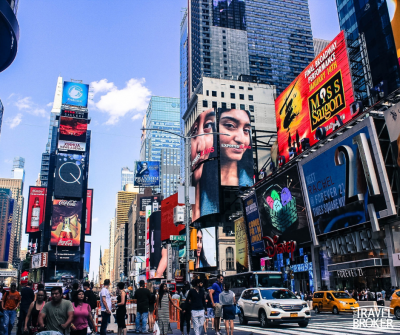 The queue for Security in JFK was slow but not as bad as recently in Dublin (we had no queue heading out on Thur).

My second visit to NYC was as much fun as my first and Ciaran and Kevin both really enjoyed themselves. They loved the variety of all the different places we visited,  with their individual atmospheres and definitely intend to return.

– m&m’s and gulliver’s gate
– Bushwick street art in Brooklyn
– gospel: first Corinthian Baptist church in Harlem, Salem United Methodist church or Brooklyn tabernacle. But check the timetable.
– in Harlem: Apollo theatre and Harriet Tubman statue then walk to Morningside Park and Columbia . Plus street art the show all the Black heroes on the corner of #126th street and Malcolm x Blvd. 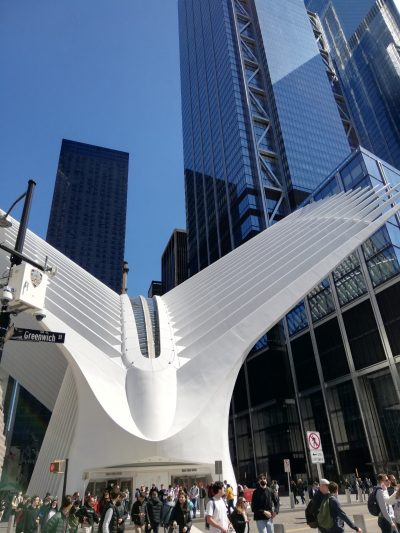 We booked our trip through the Travel Broker and the staff could not have been more helpful.

Our original plan was to go in March 2020 but Covid scuppered that one.

The Travel Broker looked after our Aer Lingus flight vouchers and rebooked our flights and accommodation this year.

When our return flight home was brought forward by 30 minutes they made sure to contact us about this change.

Thanks so much to Ann, Carmel, and Clare of the Travel Broker for helping make this such a memorable trip.